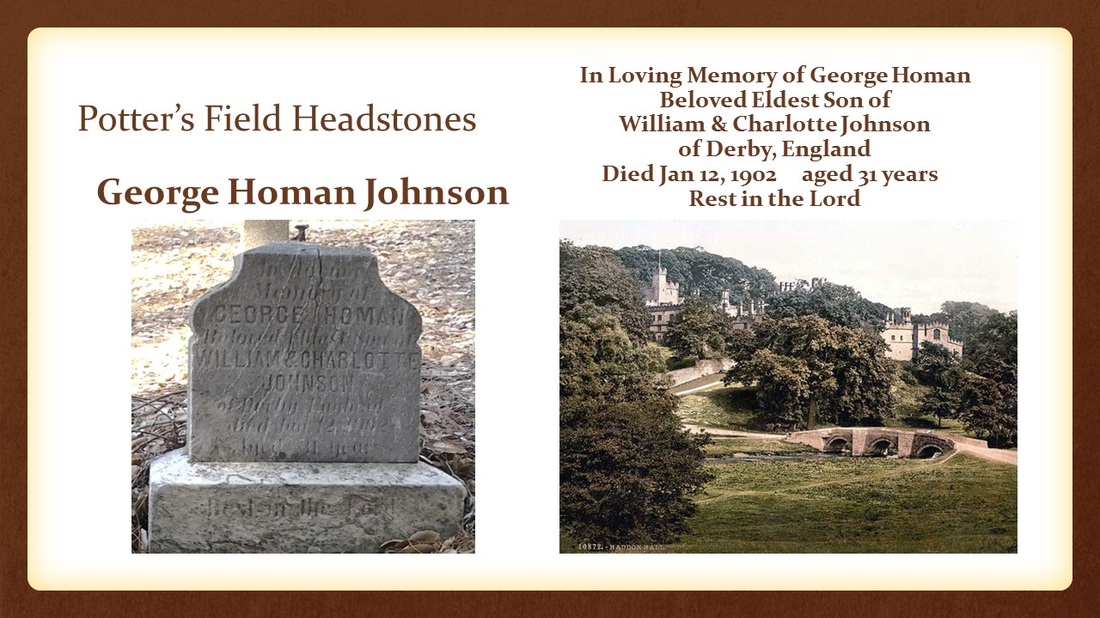 ​George was born on March 11, 1870, in Nottingham, Nottinghamshire, England, the eldest son of William and Charlotte Tinker Johnson, both age 30, after his older sisters Mildred Charlotte and Olive Brindley and before his brother William Francis.  When George was one, his family moved to the town of Duffield, in the civil parish of Duffield, Derbyshire, England, at Fern Hill Cottage.  At the time, his father was a tanner in the leather trade.  At two, his brother, William Francis, was born on March 19, 1872 and the  family has moved again.  This time to the village of Quarndon, Derby, England.

On January 5, 1879, George's parents decided to baptize their children at the Cathedral of All Saints in Derby, when George was eight.  By 1881, they are living at 35 Uttoxeter New Road in the Ecclesiastical Parish of St. Werburgh Church, Derbyshire, when George is 11. His father has gone from being a leather tanner to owning a shoe factory employing "20 hands + 3 boys".  His family has acquired modest means and employed a domestic servant, 19 year-old Ann Atkins from Newhall. 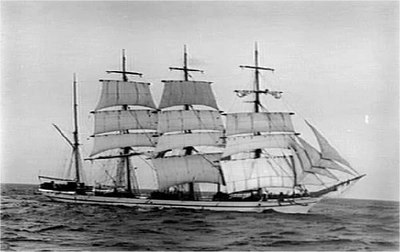 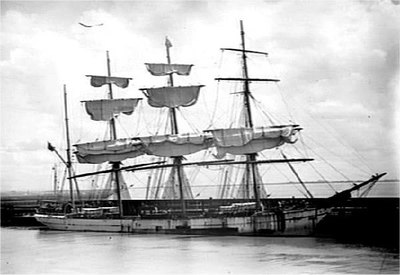 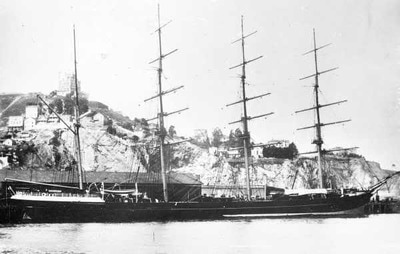 On November 16, 1888, 18 year-old George embarked on his lifelong interest in seeing the world by becoming a British Merchant Marines apprentice aboard the Drumelton.  An apprenticeship required a deposit of £10 – 20 or a premium of £40 to be paid through indentured servant-hood.  George chose the latter to the Liverpool shipowners, Gillison & Chadwick in London, England.  (Since his family had means, we can only suspect that his father wanted George to take over his shoe factory and therefor refused to pay for his apprenticeship training.  A sailing career at that time was not held in high esteem.)

Insistent on seeing the world, George enters into an apprenticeship contract to serve aboard the Drumelton for four years with his wages garnished to pay his fee (apx. $5,320 today), while they agree to provide him with food, living arrangements and clothing.
However, according to his “List of Testimonials and Statement of Service at Sea”, George "deserted" the Drumelton in San Francisco, CA on July 16, 1891.  ​ 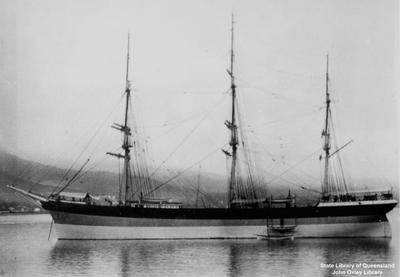 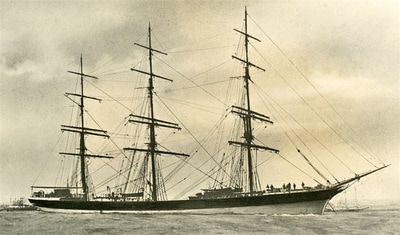 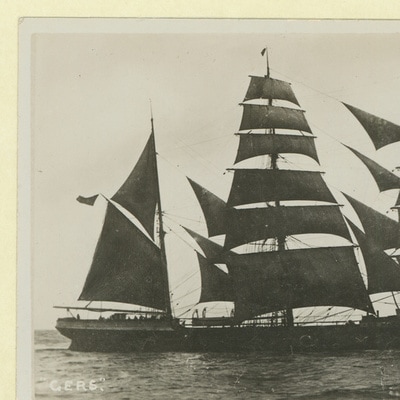 SS Strathdon
​On August 6, 1891, he becomes an “Able Seaman” aboard the iron ship, "Benicia" owned by Ismay, Imrie & Co. of the White Star Line, which carried goods and some passengers.  From there he moves to the "Culmore" from March 10, 1892 till May 30, 1893.  After the Culmore, he serves on two more ships before working on the "Strathdon" (originally named the "Queen's Island" and renamed by the Aberdeen White Star Lines) from October 5, 1893 to June 25, 1894, traveling to and from London to Australia. 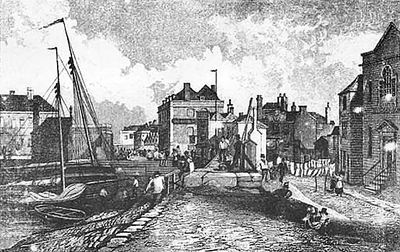 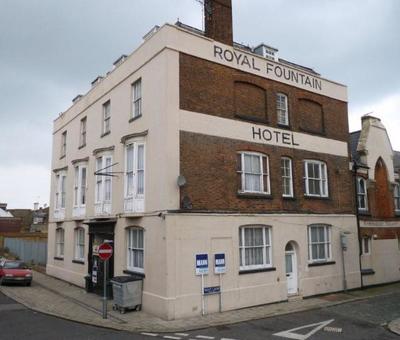 By June 30, 1893, George applies for examination to become an officer listing the Royal Fountain Hotel on West Street in Sheerness, County Kent, England as his permanent address.  Many of us would think that living in a hotel meant less than favorable conditions; however his father William, owned the hotel employing a staff of 10, from an accountant to a barman, while his mother and sister, Mildred lived there as well.

George had spent 4 years, 10 months and 25 days at sea, when at the age of 24 he received his “Certificate of Competency” on July 19, 1894, number 028065, as a “Second Mate in the Merchant Service”, by the “Lords of the Committee of Privy Council For Trade”. According to the Merchant Shipping Act of 1854, he was now qualified as an officer on an English merchant ship.  As a Second Mate, charged with ship navigation and being emergency medical director on and off ship, George would have needed a very likeable personality, some medical skills, along with strong diplomatic and leadership skills in order to work well with and teach others.
​
George was 27 years old when his Certificate of Competency was stolen from his berth on the British cargo steamer, the SS Megantic (renamed the SS Anglian in 1898).  On his Declaration of Lost Certificate, he states it was “last seen by me in New York, and it was stolen from my berth on board the ship when she was there about the 14th March, and tho’ I had made inquiries from the police authorities, I have been unable to recover the said certificate.”  On his Application for Renewal of Certificate, George is living at 1 Milk Street House, Milk Street, London, England in April of 1897, but wanted to have his renewed certificate sent to the Victoria Docks in London.  After paying 5 shillings, he receives his replacement Second Mate Certificate on May 7, 1897 and renewed Certificate of Competency number 031796 on June 3, 1897. 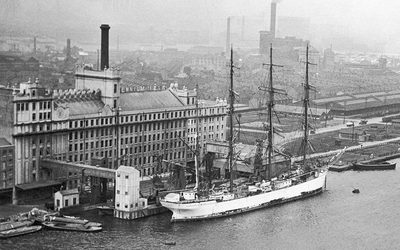 1910 Victoria Docks, London
​We contacted the County Recorder’s office of Contra Costa and applied for an informational copy of his death certificate.  Unfortunately, no record was found.  We learned that over the years (as Counties transfer records from one system to another) record indexing becomes incomplete, leaving countless records unable to be located even though they still exist. Additionally the California Death Index currently only records deaths from 1905 to present. However there is an volunteer effort underway to expand the index's earlier records.

On our own, we found him quite by accident boarding at 1533 Mission St, San Francisco under the 1900 US Census. Recently (2019 - 2021), we discovered many documents that told us what happened to George.

On July 10, 1901, George had the good fortune to be Second Mate on the James Kerr as it left Antwerp, Belgium with Captain Thomas Yardley Powles.  Captain Thomas Yardley Powles, along with his wife Jane (also a Second Mate) were known for treating all their men with curtesy, liberty and kindness along with creating a family atmosphere.  Mrs. Powles would have been George's "mom" on ship as she would "nurse the men when ill, help them when they were in trouble, and even darn their socks."

His shipmate, W. G. Bennett, writes about the trip and working with George in his diary.  "The fog lifted a little so that we could see Dover on the starboard side and then it came down again.  We hoisted sail about 11am.  In the afternoon, I wrote a letter to home.  We picked watches.  I am in starboard watch under the 2nd mate."
​
We also discovered the British Merchant Marines kept their own member death records under British Deaths at Sea, 1781-1968.    We found George listed as a Second Mate on the James Kerr, having sailed from Antwerp, Belgium and arriving in San Francisco, CA on November 15, 1901.  The details stated he died in Port Costa, CA, on January 12, 1902 from an “Injury sustained by being knocked down (and run over) by moving train, when crossing railroad track.”

In the January 14, 1902 San Francisco Call article, the title reads "SEAMAN IS STRUCK AND KILLED BY TRAIN.  Second Mate Johnson of the James Kerr loses his life in Port Costa."  "CROCKETT, Jan 13. -- G. W. Johnson, second mate of the ship James Kerr, was killed by a Southern Pacific train in Port Costa yesterday.  Johnson had joined the ship in Antwerp only six months ago.  He was a splendid seaman and much admired by officers and crew.  He was 27 years of age and a native of London.  The body was removed to Martinez by Coroner Carry." (Curry)

In an article on Captain Powles by a photographer (author unknown), it states " While the ship was at Port Costa loading wheat, I took the picture we are talking about".  This means the ship George was on, the James Kerr, could dock in Port Costa.  More than likely George was helping load wheat out of the Southern Pacific Train and on to the James Kerr. 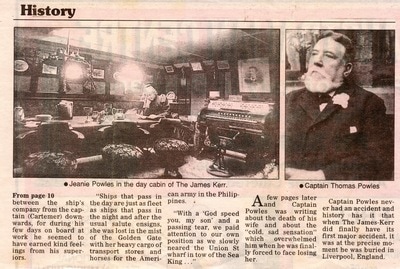 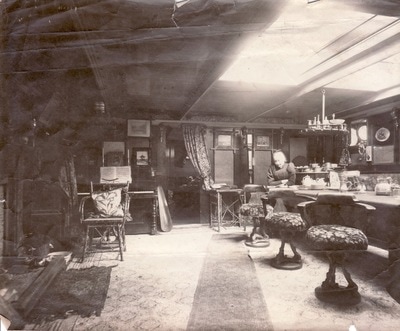 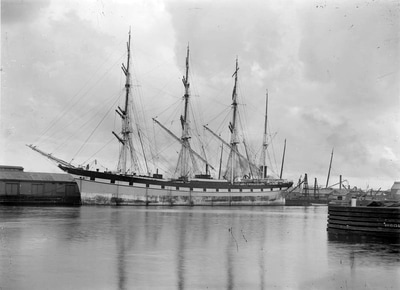 James Kerr docked in Australia
​Four days later on January 16, 1902, the James Kerr left the port of San Francisco for Australia without their beloved second mate, George Homan Johnson whose desire was to see the world.  Not having family in America and notifications to families being slow, he was buried in Potter's Field by the Curry funeral home. Unlike many who are buried there, his headstone still stands.  Perhaps it was the kind and compassionate Captain Powles who commissioned his nice headstone.